I have a Cinderella complex.  There, I’ve said it.  Phew!  In all seriousness, my connection to this particular fairy-tale spans decades and has yet to diminish.

By the time I was seven years old my family had made numerous trips to Walt Disney World.  It remains a place that brings me great joy, inspires creativity and fosters imagination.  From a very young age, Cinderella quickly became my favorite Disney movie.  Was it the representation of a character so kind, thoughtful and caring that moved me?  Perhaps it had to do with the beautiful melodies that instilled a deep love of music that has yet to loosen its grip on my soul.  Or, maybe I identified with this film and its title character because she looked like me.  Regardless of the whys, the fact remained that “Cinderella” was my favorite Disney character, and the seven-year old me was about to meet her idol.

Sitting on the Main Street curb in Disney’s Magic Kingdom, I waited with anticipation for the evening’s parade to commence.  The music started, the lights illuminated the night sky, and the crowd erupted in cheers.  I waved with excitement alongside my fellow parade-watchers.  Then finally she arrived!  Strolling down Main Street in her silver carriage, “Cinderella” greeted the onlookers with a wave and a smile.  Then she pointed at me and mouthed “You look like me.”  Me?  Did she really just speak to me?  With my long blond hair and tiny stature.  A girl who would shy away from attention was just recognized by her favorite Disney princess? 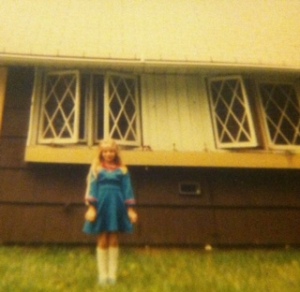 That moment means so much to me, nearly three decades later.  I think about the graciousness of the young lady riding in that carriage.  I wonder if she realized just how much a single moment of kindness and attention mattered.  As an adult I still look for those moments but seldom find them through external means.  When I go to concerts, stand outside Broadway stage doors for a picture and autograph or attend award show red carpets, I do so with an appreciation, respect and connection to those who choose the remarkable power of artistic expression and am inspired to create my own.

For my 36th birthday in a few weeks, I’ll be visiting NYC in the company of dear friends and family with hopes to attend a Broadway show.  There’s still that 7-year-old girl inside who lights up with the mere mention of Disney World and combined with my long-time love of musical theatre here’s hoping that Rodgers + Hammerstein’s Cinderella will be one of the shows we’ll be able to see!

To all those young girls out there who sit on that Main Street curb waiting for their favorite Disney princess, keep dreaming, wishing and believing.

*DISCLAIMER:  A reminder that the opinions stated above are mine alone and do not reflect any other person, company or entity’s position.  I simply share my appreciation and respect for those stories and characters that helped shaped my childhood.*

Join in on the discussion! Just leave the SPAM in the edit pile. Cancel reply