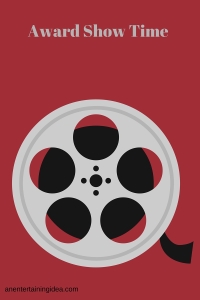 Today marks the start of Golden Globes weekend and though I’d much rather be in Hollywood interviewing artists on the red carpet, I’m still excited for the telecast regardless of my location. Granted, I don’t watch any of the nominated TV shows nor have I seen any of the film nominees, but this is the time when I decide which ones interest me enough to spend my time or money.

I originally planned to host a viewing party, as I’ve done in years past. However, this year’s viewing will be a low-key event involving my couch and some themed desserts. As I look ahead to Sunday’s telecast, I included some of my earlier blog entries regarding award shows and why they fascinate me so.

CHAMPION THE ARTS – “...So while my friends and family may plan for the big play-off party I’ll be waiting with excitement for the upcoming entertainment award show season.”

A GOLDEN REQUEST – “I have no desire of ever attending a Super Bowl but I do have a goal of going to each major award show at least once in my lifetime.  And the Golden Globes are the ones I seek to attend next!”

REQUEST DENIED – “I arranged to visit my sister and her family in Los Angeles once I found out the date of the Golden Globes.  I figured I’d multi-task; spend time with family and check off “attend the Golden Globes” from my bucket list. ”

*DISCLAIMER: No endorsement by anyone associated with the Golden Globes telecast, the HFPA, or their affiliates/sponsors/subsidiaries is implied.*

The next item on our countdown is…General Hospital  (ABC Network)

Dramatic television series can inspire, motivate, educate, and empower. However, they also have the ability to reach us on an emotional level. They do so by creating characters we enjoy watching, and rooting for, only to take them on journeys that make us reflect on our own lives and choices. While I’ve cried many a time during TV shows, there are five TV moments that not only had me sobbing like a baby but impressed me on a creative level. 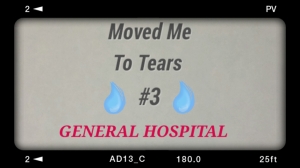 #3 – ZANDER SMITH (General Hospital, portrayed the role from 2000-2004): I’m accustomed to characters dying on daytime dramas; after all, I’ve been watching them for over thirty years. Given the numerous and impactful deaths that occurred on General Hospital over its five decades on the air, Zander’s death may seem an odd choice for this list. Emotional storylines like B.J.’s death in 1994 and Stone’s a year later changed the canvas of the show. I cried along with the characters and applauded the artistic choices. As emotional as those deaths were for the other characters, the show, and the viewers, Zander’s death affected me for a much different reason.

Behind-the-scenes changes (i.e. head writers, executive producers, network reorganization) affect the daytime dramas too, sometimes more significantly and not always in ways that do justice to the show, the characters, or the gifted actors. The hard-working teams that bring daytime dramas to the screen five days a week have responsibilities that many of us can’t fathom. I respect the art form and those involved, and write this from a viewer’s perspective.  To clean the slate, or erase storyline choices, interesting yet complex characters get used as scapegoats. Their actions become unstable and very quickly shift to dangerous. From my perspective, they were vilified in order to wrap a storyline and find a character on which to lay blame. Within a year’s time, General Hospital killed off three such characters: Stefan, A.J., and Zander.

Zander’s arrival may not have intended to prompt such passionate reaction from the viewers, but the on-screen chemistry and acting prowess of Amber Tamblyn (Emily) and Chad Brannon (Zander) created a relationship that we wanted to see develop. And that it most certainly did. When Amber left the show and Chad remain, this beloved on-screen twosome had a bittersweet goodbye that showcased the growth of each character and the beautiful love story that developed over time. Emily was recast some time later and the relationship changed. Zander quickly became the “not-as-popular” love interest for new Emily and his character started making choices that were unusual, confusing, and head-scratching. Ultimately, they wrote him into a corner, having him hold Emily hostage (a cyclical choice, as that’s how their storyline began) only then to be gunned down by the police. I knew it was coming, yet I sobbed uncontrollably.  I cried over the death of a character I enjoyed watching, the frustration over storyline choices that did a disservice to the show, and for all the character development opportunities missed.

*DISCLAIMER: No endorsement by anyone associated with General Hospital, its parent company, affiliates, sponsors, or artists implied!*

The Golden Globes came and went.  Neither did I watch them on television nor did I attend despite my written request a few weeks ago.

I arranged to visit my sister and her family in Los Angeles once I found out the date of the Golden Globes.  I figured I’d multi-task; spend time with family and check off “attend the Golden Globes” from my bucket list.  After doing some research and realizing that tickets are not made available to the public I decided to step outside of my artistic box and hope that by just believing hard enough a door would open.  In the meantime, I set my DVR at home to record…just in case.  Ironically enough, despite my brother-in-law’s feverish attempts we were unable to watch the award show Sunday evening.

I have never before lowered my guard and asked for a selfish request to be granted.  That is, until I wrote a blog entry imploring the entertainment world to grant me access to the Golden Globes.  I shared the post numerous times on social media, linked it to entertainment organizations, TV show and film profiles and well-known talk show hosts.  I hoped deep down that my words would move someone into action.  That my deep sincerity and love for the creative arts would tug at some high-level executive’s heart-strings.  That they’d say, “Did you read this?  Let’s send this girl to the Globes!”

By noon on Sunday I had accepted the reality that no one was going to knock on my sister’s door with a camera crew and announce, “Are you ready to go?  We’ve got a team ready for hair and make-up.  You didn’t bring a dress?  That’s okay.  We have a selection for you to choose from.”  I suppose my life-long Cinderella fascination finally took shape.  There was not to be a fairy godmother to whisk me off to the award show ball.  No one to magically know how much I truly wished for my request to be granted.

I put myself out there in a way I never have before and it’s mildly embarrassing and greatly frustrating that I allowed myself to rely so heavily on the power of positive thinking and the actions of others.

The greatest lesson from this experience?  To focus on my own creative pieces (whether it’s the YA fantasy novel that’s nearing completion or the screenplay that’s in progress) and less on those of others.  To complete my own work, to the best of my ability, and know that when I do go to the Golden Globes it’ll be because I’m nominated!